by Burton Blais and John Partington

Two miles off the South Western tip of Amherst Island, on a heading of 156° M, the tiny yawl beat into a strong Sou’Westerly. Ahead was the wide expanse of an inland sea showing numerous whitecaps, with no land visible on the horizon. The little boat rose to the oncoming swells averaging four feet in height, with the occasional five footer, plunging into troughs with spray flying over the gunwhales. On board were two intrepid sailors, determined to reach Main Duck Island at the eastern end of Lake Ontario.

The leading character in this drama-comedy is Gail O’ Wind, a Drascombe Lugger. Although this 18 foot dinghy yawl has a world-wide reputation for seaworthiness, most published accounts have been about Lugger cruises taken by extraordinary sailors. The question remained, even if an experienced sailor like Webb Chiles in his Lugger, Chidiock, crossed the Pacific Ocean, could a Lugger crewed by novices reach and return from Main Duck Island?

Burton and John considered this question time and again during class breaks while studying a Piloting course offered by the Canadian Power and Sail Squadron. Burton, who sails a Tanzer 22 on the St. Lawrence River, was enthusiastic. However, John, who sails Gail O’ Wind on Ottawa’s Lac Deschenes, had some reservations. Although he had made a return crossing of New Brunswick’s Baie des Chaleurs, his later attempt to reach Main Duck had been unsuccessful. But discussion with Burton lead to a detailed reconstruction of that cruise which revealed three failure factors: no chart; no compass; and a sadly hung-over captain and crew. John then became enthusiastic. He was keen to learn how his modified sail plan would work in open, wind-swept waters. The modified rig included a bowsprit with jib and staysail, a much larger gunther-rigged boomed main with one set of reef points, plus the original mizzen held out astern by a bumpkin. The fact that she could be easily trailered from her home port in the Ottawa area to any suitable departure point on Lake Ontario further buoyed the proposition. Thus, after passing their Piloting course, the dynamic duo decided on the last week-end in July as the date for their crossing. 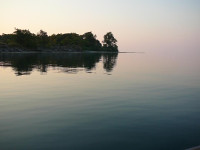 Soon after, faint vertical features began to emerge on the South Western horizon. Could these be the False Ducks? John kept scanning South and was finally rewarded by the sight of a tiny smudge on the horizon. This gradually grew into a row of black dots, which merged and materialized into a dark line with a white dot at the western tip. Soon, high cliffs, trees, a large house and lighthouse were born from Gail O’ Wind’s labours. Metamorphosis complete - Main Duck Island at last! A humbling, happy moment for the two friends.
As the island loomed closer ahead, the decision was made to head several points to windward, in order to ensure a downwind approach. Six and a half hours after departing the Bath marina, Gail O’ Wind rounded the North West point of Main Duck, ran parallel to the rugged cliffs, entered a quiet cove in the lee of the island, and finally coasted onto the pebbly strand.
After landing camping gear on the beach, the two men exhilarated yet exhausted, erected their tent high on a bluff overlooking the cove. This would have been the time to prepare dinner, but the stove and some fixings had been left behind. Hence, after munching hunks of dry bagette and quaffing water, John and Burton explored the island, which was tinder dry and strangely quiet. No small animals or birds were seen or heard inland. Later that evening, the day’s adventure was recounted over a few beer provided by “C.A.” and her friend Bert, who had thoughtfully motored out to verify the safe arrival of Gail O’ Wind.
About 05:30 the next morning, the sound of cliff-pounding waves jet-propelled the two sailors from their sacks. Was there a storm brewing? Had Gail O’ Wind’s ground tackle held? Relax. It was only the wash from a distant freighter. But what a sight! Against the rosy pink of dawn the freighter appeared suspended above the mirror-like horizon. The two then broke camp, dragged everything down from the bluff and repacked the Lugger. Then a delightful cup of java was provided by “C.A.” and Bert, as well as a quick tour of the island by motor cruiser.
The return journey was uneventful in light and variable winds. Navigation was greatly facilitated by the presence on the horizon of the two giant chimneys from the power generating plant on the mainland just West of Bath. Sometime early that afternoon, the Lugger once again passed Loyalist Cove Marina breakwater. Thus, Gail O’ Wind contributed in a small but significant way to a swelling archive of successful sea crossings by Drascombe Luggers. The trio’s landing also meant that Burton and John had completed a sailor’s rite of passage in traversing a large expanse of water and returning safely to tell their tale.
Messabout Sea Stories